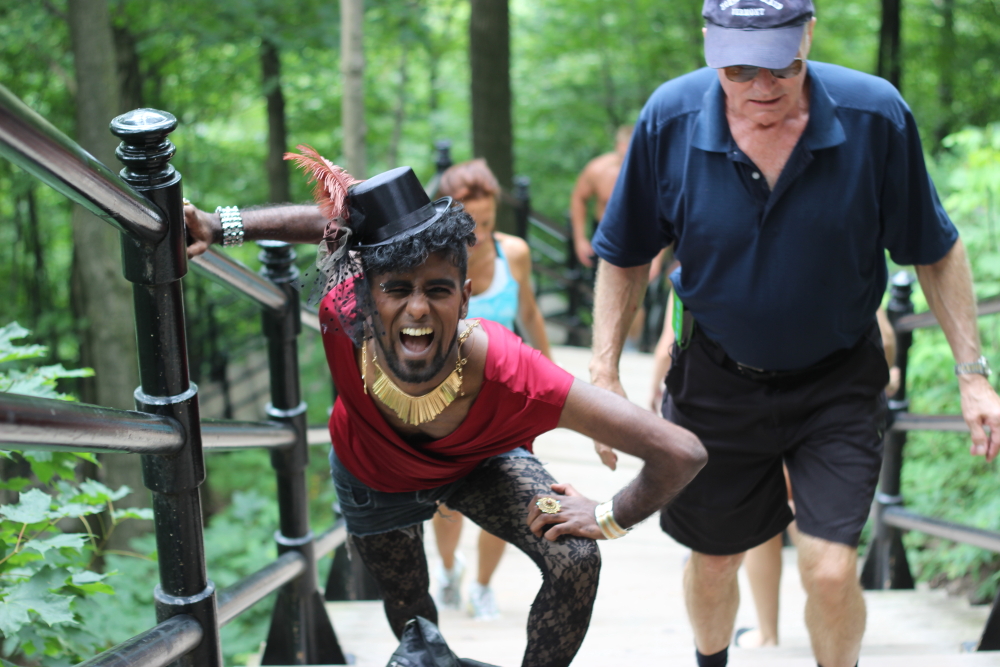 ‘RACE’ IS A DRAG! was a series of performance and public interventions that took place between July-September 2012.

In this series of performances, Kama La Mackerel draws on the embodied, emotional and communal experience of queer people of color living in Montréal to disrupt the predominantly white and heterosexist gaze that permeates and surveils Montréal’s public spaces. Drawing on four months of research where the artist recorded the actions and reactions of commuters in Montréal’s public transportation, in their interaction with queer and racialized bodies, Kama La Mackerel lashes out a fierce tongue: “WHAT YOU LOOKING AT?!”

“In Montréal,” they say, “race does not exist: only language exists… And then, we’re colorblind.” ‘RACE’ IS A DRAG! is a performance that delineates the limits of Québec nationalism in showing that language is only very literally skin-deep.

Faced with daily micro-aggressions, coming to terms with furtive gazes and curious looks that spit foreignness onto the non-white body, the artist explores the thin line between fascination and disgust with regards to an, albeit francophone, darker shade of skin. ‘RACE’ IS A DRAG! throws a hint of darkness onto the contradicting tension that characterizes racial dynamics in the public sphere in Montréal, i.e. race as invisible (we are colorblind) and race as too-visible (yet we stare).

Combining conventional drag performances (complete with lip sync, dance, song, vogue etc.) with a grotesque androgynous aesthetics, the artist performs the racialized body in the ways that it is seen, treated, masqueraded, hidden, covered, uncovered, twisted, in order to engage with the dominating gaze that structures the organization of public spaces. This queer and anti-racist reclamation of the cityscapes aims at decolonizing the racist and sexist gaze, to get the eye to look differently, to bring to light the visible and invisible prejudices that lay behind the retina.

By asking, “WHAT YOU LOOKING AT?!” Kama La Mackerel aims at gender-bending and gender-fucking, but also at race-bending and race-fucking, for in a city like Montréal, isn’t race just a drag?!